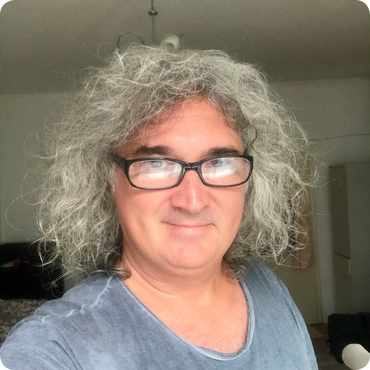 I was born in Turkey, in 1963. I have been living in Vienna, the capital of Austria, and working for our planet, since many years.

​When I was a child I used to make my mother and elder sisters read children books and various comics to me, even before I could read and write. While absorbing the stories, I also admired particular illustrations.

I started to depict stories into picture at an early age. In my stories, Indians and cowboys were looking for ways to be friends instead of fighting. I have always been impressed by the quest of peace in the 60s and 70s. I truly believe that telling nice stories to children is the way to make to peace.

Besides drawing, I have performed in children’s theaters, made films, and I played music quite passionately when I was a teenager. But the excitement of drawing has always been my focus. During my high school years, I started drawing caricatures and comics in magazines in İstanbul. At the same time, I was drawing illustrations for advertising agencies as a freelancer. I drew my first children’s book in İstanbul in 1982.
​
In 1983, I figured out that I did not want to return from Vienna, where I was living as a tourist, back to living in Turkey again, which was governing by a military junta at that time. I studied graphic design at the Universitat für angewandte Kunst in Wien, University of Applied Fine Arts in Vienna.

Since that time I have been working as an illustrator, graphic designer and artist.

During this time my Works are as followed:

In the early 2000s, my little daughters, Suna Chiara and Arzu Cornelia, have motivated me with their fantastic drawings and asked me to tell and draw stories for them. Eventually, what I really wanted to do gained gravity, so I decided to focus on drawing for children.
​
The following list consists of my drawings for children:
​